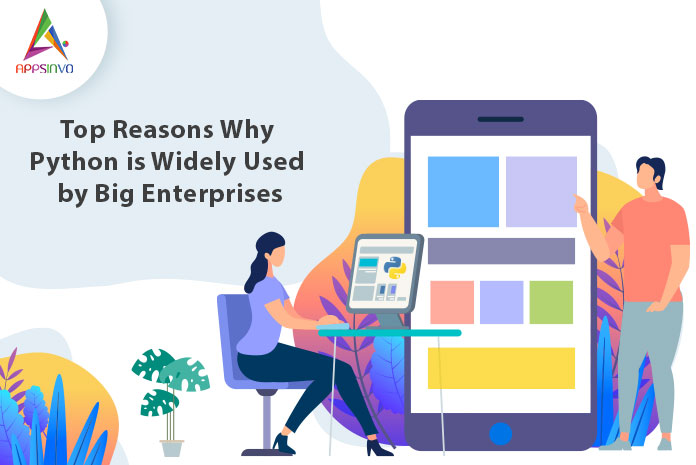 There are many adjectives like efficiency, popularity, simplicity that perfectly describes this programming language. You must be wonder about whom we are talking about? It is none other than Python- a high level, an interactive, object-oriented programming language with having dynamic qualities and features that have made the developers falling in love with it.

Reasons Why Python is Widely Used by Big Enterprises

Unlike other programming languages, Python is easy to learn and it is straightforward syntax emphasizes code readability and lessens the cost of program maintenance. It promotes the program to reuse and modularity and supports packages and modules. For python, the interpreter is the real winner. In the account of any error or bug, the interpreter is the one who identifies the error and resolves it.

Python is one of the best ways to figure out the sustainability of technology for enterprises. The technology landscape is replete with examples of IT behemoths and enterprises like, Paypal, Google, Youtube, Instagram, etc which are using Python. Through this, it becomes clear that Python can match up to the larger enterprises’ needs and help in achieving the operational enhancements.

As an object-oriented, interactive, and interpreted programming language, Python has combinations of exceptions, modules, high-level dynamic data types, dynamic typing, and classes. With having the unambiguous syntax, python has interfaces for several windows systems and extensible in C++ or C. python is portable as it can run on several variants of Unix.

Technologies and legacy systems are the inseparable part of the enterprise IT solutions. By selecting python as your technology platform for app development will helps your developers to easily use it because of its dynamic and keep evolving features. Python keeps the developers morally upbeats as enterprise app development is complicated and time-consuming.

Big enterprises have interconnected systems so any new app has to integrate with the existing app network smoothly and here the one and only python is the reason why big enterprises prefer to use it. Python provides the enterprise’s developer to integrate with the traditional enterprise-level programming languages like Java, .NET, PHP, etc. in any case where an IT infrastructure already exists with inter-connected and complicated enterprise apps, python will operate as a glue to keep them together with the old and new infrastructure fragments.

In the world of fast speed development, Python is the one that provides a choice to develop the prototype of the software as soon as possible. The python code helps to build the software directly from the prototype and reduce the team migration time. By using the python, you can effortlessly execute the testing and coding at the same time. Switching between the prototype and real solution is a smooth game for the developers.

Python helps a lot in performing the automation tasks as it has lots of tools and modules are available which makes the thing lot easier. It is fascinating to know that one can easily reach the advanced level of automation while using some tools and essential python codes. Python is the best automation performance booster for software testing too.

A few years ago, the python was used for the offshore development for the smaller projects. But nowadays, many companies are using python to deliver developed clients’ projects. Python is a straightforward language structure which supports the cross-platform implementation such as Linux, Windows, and UNIX system. Python is guaranteed with growing community support too. So these are the reasons that make the python is widely used by big enterprises.

How Much Does It Cost To Build A Music Streaming App