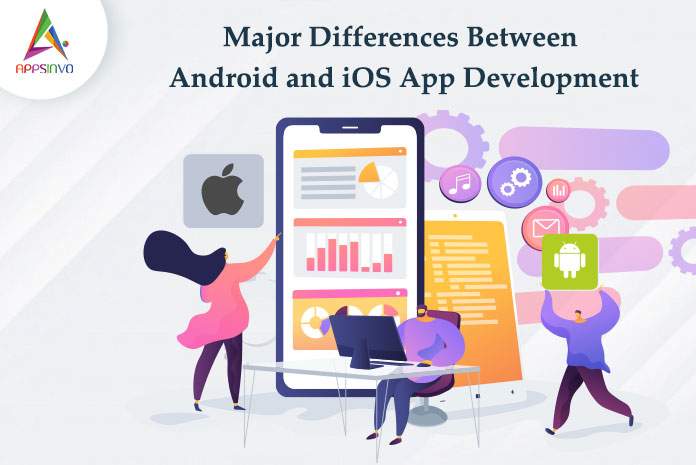 We all are using various types of mobile apps in our daily lives. There are many businesses and organizations that are already developed mobile apps and serving their services and products to their customers but there are still some businesses that are looking to develop a mobile app. And when it comes to developing a mobile app, there are only two great and huge platforms they need to focus on – Android and iOS for their app development.

If we compare the market share of Android and iOS, there are more than 1.2 billion users of android as compared to the 215 million iOS mobile apps. This is the one biggest reason why many developers are stick to only creating android apps only. So what are the other reason that gives you a view on the major difference between the android and iOS mobile apps and keep your confusion in the bay.

If you are developing an app for the existing business that already gains the trust and loyalty of their customers like retail stores or restaurants, you will most likely develop an app that is available on both platforms. If you are developing a standalone app like shopping, photo editing, or productivity apps, you can definitely choose any one platform.

With have more than 21 billion users, the google play store is highly competitive on the other hand, the apple store has a far more limited number of offerings that give new standalone apps a much better chance of getting notified.

If you want to develop an app for various platforms, you can easily use the platform like Marmalade or adobe air. For developing an app for iOS, the design process involved in it is easier than google and they are much more hands-on throughout the process.

Both iOS and android app development need approval from the main platform designers, they have to make sure that the app operates flawlessly within their store and does not cause any kind of cross-compatibility issues with the other similar apps.

The guidelines of apple’s app store are much specific therefore it requires to familiar with the guideline before the launch and development of your app. You may find a way with having a cluttered UI that is quite difficult to navigate on the play store but apple will not approve your spp until it meets its demanded standards.

While selecting a platform for your app development, you need to pay attention to some points that we have outlined above. We have also given you a comparison chart that helps you to give an easy difference between android and iOS app development.