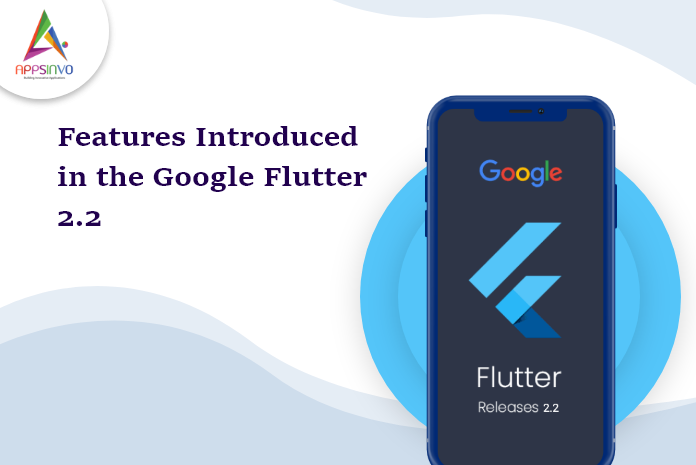 Recently, Google announced Flutter 2.2 the latest version of their cross-platform app development framework at the google I/O event. And it has exciting updates like android charged components, iOS performance updates to desktop and Dev tools, and many more.

As you There is a lot to acknowledge about the freshest updates of Flutter. So, let’s take a look at Flutter 2.2 with all the newly added features.

Flutter 2.2 comes up with a range of changes and Dart 2.13. It includes the second most demanded feature type aliases, dart FFI, updates on the null security feature, etc.

Foreign function interface is a procedure for calling C code and it has a new feature in which the user can protect the in-line array in dart directly. This will helps to eliminate padding to lower overall memory consumption.

If you are building a project using flutter 2.2, it will generate a project with null safety by default. Most of the plugins are decreased to the null security, it is secure to leave the flutter app to sound null safety.

Flutter extended its support to a number of platforms with different input types. In this release, users can fully personalize the keystrokes associated with the text activities. This feature of flutter 2.2 will give endless possibilities to the flutter app developers.

In this new release, whenever the written content exceeds the limit and screen height, the scrollbar will be added automatically. This feature is not there in the previous version of the flutter, developers have to add it manually. With this new update, flutter introduced personalized for the scrollbar UI.

This new ads SDK maintains an adaptive standard format and a new payment plugin, the team of Google pay permits the developers to take payment for physical goods on both android and iOS. There is also a similar codelab and modernized in-app purchases plugins.

There are web apps that can do background-catching using the service workers. Android apps help assessed elements and iOS developers get the latest tooling to precompile shaders to diminish the first run jank. The dev tools suite has also chosen a bunch of features that will support the developers to comprehend how the memory is allotted in their apps and it now maintains third-party tools extensions.

There are more than 2 lakhs apps in the google play store that are build using the flutter and some apps like WeChat that are claiming billion of users. Same as the Samsung is porting flutter with an open-source and sony is working to render a flutter solution. Here is the biggest news is that Microsoft is expanding its collaboration with Google and has released an alpha version for supporting the apps build for windows 10.

Dart 2.13 is available with all the updated features. This open-source is available free of cost. We would be happy to hear feedback from your end.

Why Should Investors Invest in the Stock Trading App Development